Published on 29 March 2018 by Rappuoli RentHouse

On the last Sunday of August, in Montepulciano the traditional “Bravio delle Botti” is held, a reenactment of a challenge between the eight city districts, which previously competed with horsesm and today with barrels. The barrels, weighing about 80 kg each, are pushed and made roll by two athletes in each district, called “pushers”, along the uphill path of about 1800 meters that goes through the picturesque streets of the old town of Montepulciano, until the arrival situated in the churchyard of the Cathedral in Piazza Grande.

The race is traditionally preceded by a beautiful and fascinating historical procession, consisting of more than three hundred figures that moves along the same route, offering games of flag and images of past times.

The word “Bravìo” comes from the vulgar “Bravium” and indicates the prize awarded to the winning district, consisting of a painted cloth bearing the iconographic image of the patron saint of Montepulciano, St. John the Beheaded, in whose honor the event is held every year.

The history of the districts of Montepulciano can be traced back to the late fourteenth century, more precisely in 1373 A.D., the year in which the City Charter devotes the entire chapter 30 to the provisions about the Palio, which appears set up precisely with this law, in honor of the patron saint of Montepulciano (August 29th), “to perpetual and happy memory of the citizens” The Bravìo with horses was disputed until the seventeenth century, then suppressed for reasons of public order.

The districts, which had a monitoring and administrative role, are already described in the municipal charter of 1337 A.D.,in the fourth book of the Mayor, and with the same names they have come so far: Cagnano, Collazzi, Coste, Gracciano, Poggiolo, San Donato, Talosa, Voltaia. Then and now, the districts are grouped into thirds or terzieri:

Here are the descriptions and the colors of the districts:

Each district had its “Societas”, with a boss called “Rector”, and administered, within certain limits, their business. The Rectors represented the district in particular solemnity, as in that of St. John on 29th August, during which, they had to go to the church of Santa Maria (almost in the same place where today stands the Cathedral of Montepulciano) with at least 10 men each to offer to the saint a candle of 15 pounds (10 pounds those of the Districts of Collazzi and Coste). On the occasion of the feast of St. Agnes on May 1st, they had to go to the church of the monastery of Santa Maria Novella out of Gracciano Door (today the church of St. Agnes) to offer to the Saint an adequately sized candle. In these two important feasts for the community of Montepulciano, it was impressive the participation of the population and the “deployment” of the municipal leadership, the Gonfaloniere, the numerous “notaries”, the Mayor, the powers, the Judge, the Councillors, stranger Officers and the garrisons of the cities.

The history of the districts of Montepulciano allows you to get an idea not only of the life of the cities of the time, but also to its urban structure and the developments that had at the turn of the ‘200 and ‘300. The oldest districts are definitely those of “Sasso”, or the highest part of the city, site of the first settlement area, namely San Donato, Talosa and perhaps Poggiolo. Surely most recent are Collazzi, Le Coste, Cagnano, Voltaia and Gracciano until 1281 considered “villages” (i.e. outside agglomerations the city) and they became districts by 1300. From the ancient history of the districts of Montepulciano, documented by the Statutes municipal of the time, kept in the historical archives of the Montepulciano Council, it was taken all the modern symbolism of the districts, which, inspired by the past, it has held until today the same nomenclature, colors, emblems, urban territoriality, and especially the same ceremonial model.

The recent history of the “Bravìo” began in 1974 when a parish priest, Don Marcello del Balio, had the original idea to transform the ancient horse race into a barrel race. The idea, absolutely brilliant, could not be more apt, given the international reputation and the quality of Vino Nobile di Montepulciano. The barrels are an important element in the economy of Montepulciano, they are fundamental to the aging of the wine.

The last Sunday of August is the day when the “Bravìo” is disputed: in the morning, from 10:00 in Piazza Grande important and impressive ceremonies are hosted, as the draw of the starting order of the barrels, the branding, the flag waving of the ensigns, the delivery of the cloth by the municipality to the Magistrate of the Contrade, the offer of votive candles to St. John in the Cathedral. In the afternoon at 15:00 begins the parade of the fascinating historical procession, made up of over three hundred participants.

Finally, at 19.00, after the signal given by the chimes of the City Hall, the barrels start rolling on the stone starting from the Marzocco column. After a few minutes the “Bravìo” will have its epilogue; only one district will celebrate the victory and will take the “cloth”; The others are forced to show off the bitterness and think about revenge, without rancor and with respect for the winner; a story that has been repeating for over six hundred years.
The whole week before is full of events and important events, such as the Proclamation of the Gonfaloniere and the Procession of the Candles. Every evening the districts are open to anyone and ready to welcome all with parties, dinners, games, music and wine. The event annually attracts thousands of tourists throughout the week of events, strengthening the spirit of the whole community of Montepulciano.

A major national award was presented in 2011 to the Bravio delle Botti of Montepulciano: the event of Montepulciano is in fact listed among Italian initiatives, between holidays and popular revivals worthy of attention by the Ministry of Tourism. The Tourism Minister, in a letter addressed directly to the Magistrato delle Contrade, has entered the Bravìo among the events that constitute a moment of promotion of the history and traditions, emphasizing the artistic, cultural and historical heritage and representing an important driving force for the Italian tourism economy.
The Bravìo is in a special ministerial project for these abilities to keep alive the folklore of its territory, while renewing the traditional representations, adapting to the times “and turning them into tourist attractors, able to record a wider and growing participation” .
The peculiar idea of Don Marcello, with all the advances and improvements of the recent years, is therefore focusing on the Bravìo of Botti and Montepulciano, more and more attention and interest, without running the risk of distorting the event itself by its main nature which is the social participation of an entire town. 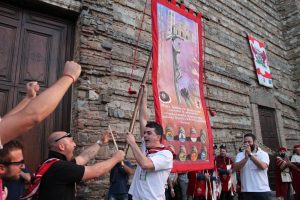